What is Blockchain?  A Complete Breakdown

Blockchain is a hot topic at the moment. It's disruptive. It's accelerating. But how many of us can truly say we know what blockchain actually is?

What is Block Chain?

A decentralized, cryptographically protected database or spreadsheet (i.e., a “ledger”) that is maintained and updated by a network of participating computers.

If you are thinking, "Wahhhhh?" You are not alone. Block Chain is a fairly straightforward process that has been cloaked behind complicated technological terminology. At first glance the lengthy algorithms and complex terminology may feel daunting, however we are going to break the subject down and give you a simplistic explanation that's easier to swallow.

Let's begin with the first part of the above definition, Decentralized. 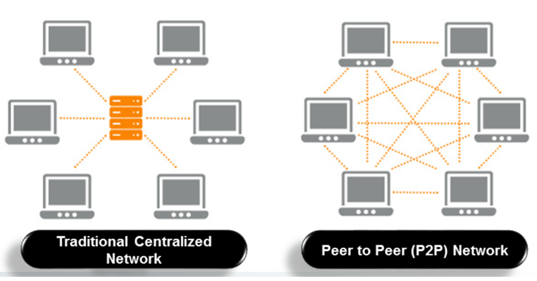 However, on a decentralized network that data is stored on numerous computers connected to a common network. Each computer in a decentralized network is called a "node" or peer" and each of those nodes has a complete history of every transaction completed in a specific blockchain. With decentralized peers, there is less likely to be a single point of failure. No one "node" going down can take down the entire network, so no matter how many users come and go, your applications should remain up and running. Also, because a decentralized model allows for independently encrypted groups that are not visible to others outside those groups, data in a blockchain are nearly impossible for others to corrupt or trace. This brings us to our next characteristic of a blockchain:

The database is protected by using hashing algorithms, which is a function that converts a larger input data string into a smaller fixed output numeric string. For example, through a predetermined set of rules a hashing algorithm will turn a message like, "Meet me in the park" into "M23P9". If there is another sentence in the database with similar wording but not exactly the same, a new hash sum will be created. So, each piece of data will have its own unique numeric string that is easy to trace and can never be duplicated.

The benefit of hashing is that using a short numeric string makes it faster to find an item when indexing and retrieving items within a database. Searching for a name like "Annalise Keating" in a database with thousands of names would take time, however using a hash algorithm that changed "Annalise Keating" into "A5K9" would be faster because matching across four digits, each having only 10 possibilities is simpler than matching across an unpredictable value length where each character had 26 possibilities.

Hashing is also extremely useful when tracking items that will affix new data while moving through any given process. Each "block" of data is "chained" together with a unique hashed identifier and new entries are indelible because the algorithm generates a “hash” for every transaction that references the prior entry. Am I losing you? Let's break that down with a common scenario...

So while the final hash might be "J3HBD8", you would still be able to retrieve the information in the original "S7W88N53" hash.

Visual representation of a block

As you can see from the diagram above, within a blockchain each block includes the genesis block or first hash, the Merkle root or hash transaction (activity which took place) and a block header which sums up all the information which was held in the previous hash. Meaning, each hash has the complete history of the data built within it and that conjoined data creates a blockchain.
To see how a single transaction is added into a blockchain, view the process below: 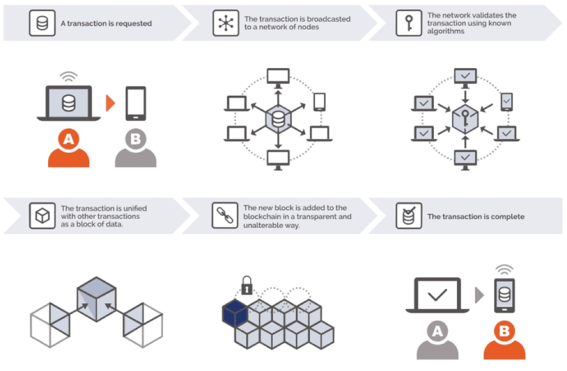 The structure of this system creates trust in the integrity of the data. Rather than individual parties verifying data, all history is stored within the data. This gives confidence to participants that each ledger reflects the same version of reality.

Blockchain is technology designed to let you securely transfer digital property, without the need of a middleman. Along with storing recent transactional information, the blockchain has a permanent record of all transactions that have ever happened within it. Because of these qualities, blockchain is a fair and trustworthy source of information which anybody can check.

Now that you know what a Blockchain is, what are some industries or types of transactions that you think will benefit from a blockchain? Answer in the comments below!
Information included in this blog was presented at CoVest's 2018 Member Meeting by Marc S. Blubaugh of Benesch, Friedlander, Coplan & Aronoff LLP.