What Are Deviations And How Do They Effect My Organization?

Often times an organization may not have knowledge of the existence of manufacturer deviations. Lack of such knowledge can result in lost of significant discounts. This article will help you understand whether deviations exist or not within your company.

Often refereed as manufacturer deviations, special pricing, or other forms of a special deal, deviations are, simply put, a discount to the OEM’s distributor pricing. Deviations are created when a distributor negotiates special price upon which their pricing is based for certain customers.

For example, for a certain widget your distributors “list price” from an OEM is $1.00 and their discount to you is 10%, so you pay $0.90 for the widget. Because you order a huge volume of these widgets the distributor negotiates a 20% discount in their cost for the widget that applies to only you. They then can potentially pass this discount on to you so you pay $0.72, but they can also just retain all or part this discount to improve their margin.

Do I have deviations in place? 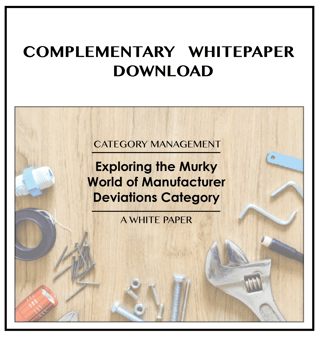 It is our view that these manufacturer deviations are the property of the customer. It is, after all, based upon the attractiveness of selling you products that they were enacted in the first place. You should be able to find out whether they exist. Unfortunately, not all distributors and manufacturers share our view.

Deviations are common in SKU intensive categories where the manufacturer holds the ultimate pricing power and where competition is limited, but still exists. Because of this manufacturers may not be sharing this information with you, at least not completely. They may pass on only a small portion of the deviation, just enough to retain your business, and retain the remainder. Another thing to consider is that new distributors are unlikely to be able to compete on price if they are unaware of or cannot get the same deviation. Manufacturers may be reluctant to grant the same deviation to a new distributor seeking the customer’s business, thinking best to support the current supplier who already has the business.

What are the effects of deviations?

The primary effect is lowering the price that your distributor pays for your company’s sales. Whether they pass on some or all of that deviation is a black box unless you take control. It is common to see 5 – 10% deviations, but it is not exceptionally rare to see 20% and higher. That is right, without a change in your distributor’s margins you could be paying 20% less for some items.

Deviations have a very negative influence on supplier portability. If there is a deviation in place the existing supplier/distributor has a huge advantage. That begs the question, would a manufacturer be willing to “share” that deviation with another supplier? Sometimes a given manufacturer may be required to notify the current distributor that you are asking to share the deviation, which puts the distributor on watch that you are shopping for a new partner. Often, though, it can be accomplished without this occurring. The important point is though, that the release of the deviations to all suppliers must occur to create a level playing field among distributors if you are going through an RFP or other business consideration process.

Download our whitepaper on Category Management Best Practices: Exploring the Murky World of Manufacturer Deviations Category and broaden your understanding of deviations. Our whitepaper provides an in-depth explanation of the topics addressed in this article and dives into: 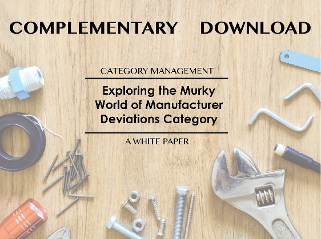